DANVILLE, Va. (WSET) — It’s bitter cold outside and at House of Hope Homeless Shelter in Danville they’re helping men, women and children keep warm in their time of need. The shelter is located at 206 South Ridge Street in Danville.

Lugar has been staying at House of Hope for about two months.

“It’s saved me so to speak,” She said. “I don’t think anybody ever sees themselves in this position… I certainly didn’t.”

If it wasn’t for House of Hope, she’d be out in the cold.

She said she was taking care of her mother for years, but had to move her to an assisted living facility recently due to her health.

She said that is one of the reason why she has been staying at the shelter. “We couldn’t do that and keep the house at the same time,” she said.

So she is without a home right now and has been unemployed for the past year, but said things may be looking up for her soon. 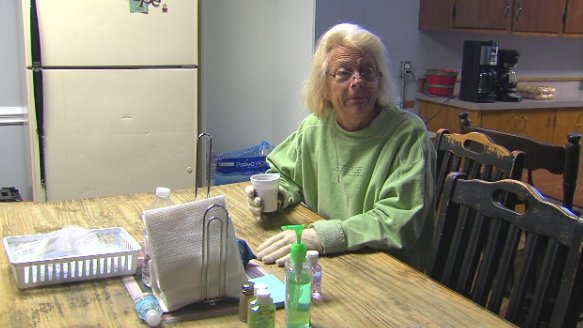 “I’ve got a few things in the works as far as some short term emergency housing,” she said. “I’ve got a real good job possibility lined up that I won’t know about until Wednesday.”

When extreme temperatures hit, that’s when House of Hope tends to be the busiest.

“It’s pretty cold outside right now, so we have nine guests here today. Our numbers usually run between 10-12, but we can house up to 16 guests at one time. It has been full several times,” shelter director Stephen Anderson said.

The shelter has plenty of food, beds and the most important thing during the winter… heat!

Guests can stay for up to two months at the shelter, but they have to go though a screening at the Danville Police Department beforehand.

The shelter is open everyday and they let new guests come in between 5 PM-to-8:30 PM.

“I just hope that everyone that’s not in the position that I’m in right now will find somewhere warm and safe to be,” Lugar said.

Most shelters do require you to have some form to stay, like House of Hope.

There are several other shelters in our area which offer relief from this frigid weather.

In Danville there is Haven of the Dan River Region. They cater to women and children who are victims from domestic violence. You can call them at (434)-483-5482. The address that is given on their website is P.O. Box 878

And in Roanoke, Rescue Mission Ministries also welcomes people who may need warmth and shelter during cold times. Their address is 402 4th Street SE, Roanoke, VA 24013. You can reach them by telephone at (540)-343-7227.

Want to join the discussion?
Feel free to contribute!

In The News NCV

Man Opens His Home to Keep Those Without Shelter Warm